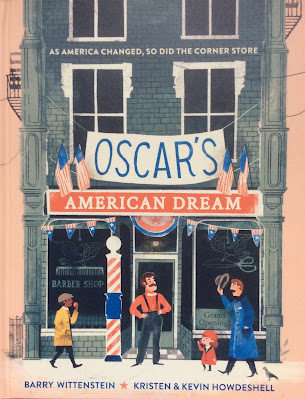 OSCAR’S AMERICAN DREAM begins on New Year’s Eve 1899 with the grand opening of Oscar Nowicki’s barbershop, with free haircuts and lemon drops for his first customers. Over the next century, that corner shop undergoes thirteen transformations and upheavals, until there is finally a last lemon drop at the end.

A few years ago I did a Q&A here with author Barry Wittenstein about his debut book, Waiting for Pumpsie, illustrated by London Ladd. Since then he has been prolific with three more award winning picture books. His fifth picture book has just been published: Oscar’s American Dream (as America changed, so did the corner store), illustrated by Kristen and Kevin Howdeshell. I am so happy to catch up with Barry about his newest book.

How did this book get started - what inspired your first ideas?

Walking around Manhattan, seeing all the empty stores, thinking to myself and saying to friends, “Remember when that bank used to be a (fill in the blank) store?” It’s the “Remember when…” game that New Yorkers play.  Played in other cities, too, no doubt.

Beginning with the Great Recession of 2008 and now with the pandemic, there are an increasing number of empty storefronts throughout Manhattan. It’s so sad: Mom and pop stores that lasted decades are forced to go out of business because of the greed of landlords. Those empty stores either become banks and large national pharmacies or stay empty. And I mean, sometimes empty for decades. It kills the viability and energy of a neighborhood. Who wants to live in a community when there’s an ATM or pharmacy or urgent care walk-in on every corner? Bakeries, coffee shops, restaurants, card stores, clothing boutiques, etc. service a community much better. My anger and sadness was part of my motivation in writing Oscar’s American Dream. 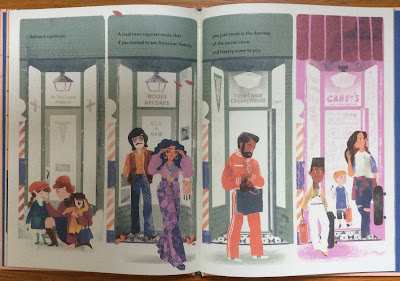 Were you involved at all with helping to pick who would illustrate your story or in what style?

No, the editor chose the illustrator.

Did you have communication with the illustrators at any point? For example, there are a lot of words in the art (signs, labels, posters...) did you give directions for those extras?

At the 11th hour I was able to engage in a conversation about some of those details. And talk about details! This book covers 100 years, so the illustrators had to research cars, clothing, signs, everything that defines an era. They nailed it. The husband and wife team, Kevin and Kristin Howdeshell, are amazing.

Your question is an important one. Not only about Oscar’s American Dream, but about the entire process of how a book is put together. Traditionally, writers are basically removed from a project once their manuscript is accepted.  I think older editors and illustrators still abide within those confines. My experience —although limited—is that younger editors and illustrators are less rigid in this regard. In the books that I was able to have my opinions heard, the changes I suggested made the books stronger.  Some historical errors that might have been missed I was able to catch. Who better to know the details than the author? Just to be clear, my suggestions always come after I see the sketches.  I’m not talking about my manuscript containing a zillion “art notes.” As an author of historical fiction and narrative nonfiction picture books, details are super important. I now try to get a verbal agreement from the editor to allow me to see the sketches.  Just so there’s no misunderstanding. 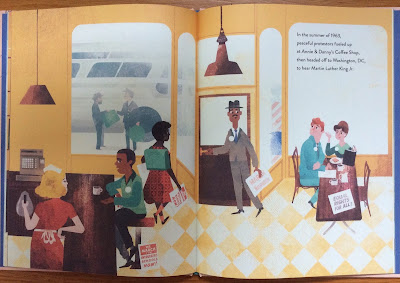 I want to just give an example of why I like to be involved. There’s a spread in Oscar’s American Dream where patrons of a coffee shop are about to board buses to attend the 1963 March on Washington to hear Dr. King speak.  This became his famous “I Have a Dream” speech.  I had finished the manuscript to A Place to Land about how Dr. King wrote the speech and the days leading up to August 28, 1963 and was moved by the descriptions of how people got to Washington that day. Some took trains. Some walked.  Some flew. Some drove. And many rode on buses through the early hours to make it on time. So, I thought I would have the corner store play a role in the civil rights movement.

The patrons have signs that they are taking with them.  Originally one of the signs read “I am a man.” Anybody who knows even a little bit about the civil rights movement will recognize those words.  But those words appeared on placards in 1968 during the Memphis Sanitation Strike.  Not 1963.  Now, maybe it doesn’t matter. Maybe no-one would notice. But regardless, it’s not accurate.  I pointed it out to the editor and the easy change was made.  This is not to fault the illustrators one iota.  I’m in awe of how they got 99.999% correct.

I love the retro style of the art, and it seems perfect for this book. It has a printmaking look, with its textures and limited color. A note on the copyright page says, “The illustrations were rendered in pen and pencil and compiled digitally.” I’m sure you must be very happy with the illustrators’ work!

I love what they did! As someone who specializes in stick figures, I am inspired by people who can draw.  All of the illustrators I’ve worked with have been so amazing. London Ladd, Chris Hsu, Keith Mallet and Jerry Pinkney. I’ve learned so much, too, about their craft.  I love listening to illustrators talk about how they approach their subjects, and their mindset when given my manuscript.

Which is why I gladly get out of the way so the illustrators can find their own vision for the book. But I don’t believe an author’s role 100% ends when they turn in the manuscript.  I’m sure many won’t agree with me.

How long did it take for this book to become a book - from your first idea, to submission and acceptance by your publisher, to the illustrators’ doing their work, to finally now being a published book?

I wrote it in 2017 and began pitching to editors in late 2017.  I don’t have an agent.  I signed a contract in early 2018, and it came out in October 2020. Which is probably typical—two or three years. It always feels so much longer. Learning to be patient is a hard pill for me to swallow. But it’s worth it when the book is published and you read the reviews from School Library Journal and other industry “bibles,” and the librarians and teachers who post on Twitter and Instagram. Hopefully, what I attempted to communicate touches my readers.

I was also motivated by the depravity of the Trump administration. I wanted to show support for the immigrants of the past, present and future.

Just like Oscar Nowicki, my grandparents arrived at Ellis Island on a boat in the early 1900s from Eastern Europe. So, there’s a personal connection. But each era has a new wave of immigrants. Moises arrives in the 1950s from Puerto Rico on a plane. Carrying a cardboard suitcase, just like Oscar, carrying his own dream.  In their own ways, Oscar and Moises add to the country’s wonderful diversity, talents and energy.  It’s so ironic that each new wave is also forced to confront the isolationists who have no clue how this nation was built. Fear of the “others” I suppose. 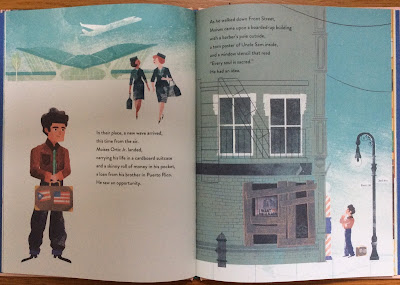 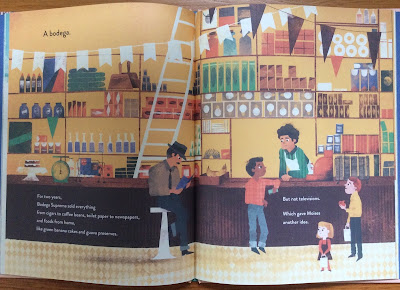 My hope is that teachers and students will be inspired to explore their own communities and  the history of their favorite stores. Then, include their own historically and culturally special moments. Each corner store has a story, and that story involves real people with real dreams.

Thank you Barry, and Congratulations!

Here is the link to our first Q&A http://monicawellington.blogspot.com/2017/02/interview-with-author-barry-wittenstein.html

and for more about Barry’s books, here is a link to his website: https://www.onedogwoof.com/